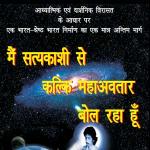 Review on THEORY OF NEW INDIA

Lava Kush Singh Vishwmanav a living legend of forward step of Swami Vivekananda & Final step of complete Brahm i.e KALKI MAHAAVTAAR of God. Born at Indian Oil Corporation Refinery Township Hospital Begusarai (Bihar) & resident of Mirzapur Distt. (Satyakashi area of kashi 84 kos yatra) Of U.P. India.
Whole discovery & discoverer are ONE IN ALL & ALL IN ONE at any dimension & real spiritualism with satisfaction of material science.
Whole discovery is based on realization of human society by UNIVERSAL UNIFIED TRUTH THEORY. This is totally establishment part of thoughts of Swami Vivekanand delivered at World Religion of Parliament in 1893 at Chicago. Which is not completed till date.

Related to THEORY OF NEW INDIA

Kashi Express: The Journey with a Holy Motive

The Indian railway being the leader in the area of mass transportation, has seen a lot of variations in the sector. The train has a lot of facilities and for that it is much known among the passeng...

To obtain the blessings of the deities in Kashi, Banaras or Varanasi, as this most revered city in the world is called, is an absolution in itself! Distinctive as being the oldest living city ...