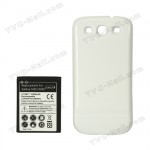 Review on Samsung i9300 Extended Battery

Brand new rechargeable Lithium-ion extended battery for Samsung i9300 Galaxy S iii
Battery Type: Li-ion; Voltage: 3.7V; Capacity: 4300mAh
Keep touch with your families and good friends by this hihg capacity extended battery
Special white battery cover for matching the extended battery
The battery operation time depends on conditions such as:
-Transmitting power level
-Signal (distance between the phone and the base station)
-Network parameters defined by the operator
After receiving a new battery, do not rush charge. First completely use out the rest of the power

Related to Samsung i9300 Extended Battery