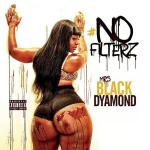 In addition to her appearance in notable female rap battles, she was given the opportunity to battle rapper Dizaster at Drake's Birthday Bash. Once she concurred that arena she took aim at The URLs rap bully Shotgun Suge, it was then she adopted the acronym M.B.D short for Mrs. Black Dyamond. But its this project, #NoFilterz., which provides a fully formed look at the proud Compton, California native.

If your first thought is to ask why this mixtape took so long to come together, she delayed the release after the passing of her father, but she never stopped working on the project.

The first single off the mixtape is Cocky, which since its release has the hip hop world buzzing about this hardcore female rapper. The video for Cocky is scheduled to be shot on November 18th in Los Angeles and the always engaging star has invited media and fans to come out and turn up with her. M.B.Ds other single off the mixtape "She don't like me", is also gaining traction among the digital DJ pools, with positive feedback and downloads daily.

Although the 14 song mixtape doesnt have any major features Mrs. Black Dyamond is holding her own. The project is available now on all major streaming services and digital platforms, and can be purchased on iTunes.
STREAM: #NoFilterz - Apple Music Spotify Tidal

M.B.D aka Mrs. Black Dyamond is represented by manager Shylise Simpson, who handles her bookings, promotions, and inquiries: Email: uggmanagement@gmail.com

WHO IS THE BEST VOICE OVER ARTIST?

Are you searching for a voice over artist? There are so many, but only one makes the difference, Tony Pasquale.Tony Pasquale has been voicing for commercials, radios and much more. His experience ...