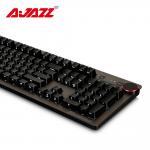 I ordered this on impulse. After all, it's a Chinese company with a broken English website, so while I was sceptical, the unique design and aesthetic of this keyboard was the reason for my purchase. Ordered through Amazon Prime, the keyboard came a day later, packaged in a decent sized box, a cardboard outer box and then a much nicer, black finish inner box. Included is the keyboard itself (obviously), a couple of manuals that are only in Chinese, and a keycap puller, with an added Ajazz Blue switch and keycap on top (makes a nice clicky fidgit toy).

They keyboard itself is fairly heavy, and also fairly large. I wouldn't recommend it for small desks, as it will probably take up most of the space. However for me it was the same size as my old Corsair so it isn't an issue. The sleek, simple design translates well from the pictures to real life, and the volume/brightness wheel is really helpful. The LED's are quite bright, however due to the front facing legends the lights don't seem to "leak" like some other RGB keyboards, however there is still a bit of a glow and the lights are easily visible. The lighting modes are really nice, which are customisable through the keyboard itself and also the software, which can be found on Ajazz's website (rename the exe in the folder to something else as windows does not like the Chinese characters and will not install)

The media buttons are very nice and tactile, however the volume/brightness wheel sometimes scrapes on the casing which isn't ideal. Mine came with Ajazz Red switches, ideally I would have wanted blue, as the red's don't seem to be clicky at all and are really light. They also have quite a deep sound, more of a clack than a click, which while still sounding nice isn't as pleasant as the Ajazz blues.

Some small issues I found were that the lights would not come on after restarts until I unplugged the keyboard and plugged it in again, however this was just a driver issue, as a reinstall of the software fixed


About Shop For Gamers