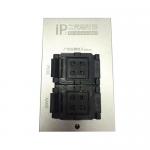 6s-7P series NAND is E3NAND structure, and has a PCI-E x2 interface, commonly known as a PCI-E NAND Flash. Contains the underlying data read and write, NAND Flash partition, repair and brush machine error reporting! It can even solve the problem of NAND on the engineering board in seconds. (Whether the NAND of engineering board is 64G or 128G, the phone only shows 4G), this instrument can sollve everything as easy as ABC, which is a true sence of programmer)