We may make some mistakes without fully understanding the operation method of Cummins diesel genset. Today Starlight Power summarizes some incorrect operations.

In this conditions, the oil supply of each friction pair surface will be poor due to poor oil supply, it will result in abnormal wear or burn. Therefore, we should ensure enough diesel oil before start up and during the operation of the unit.

After cold start, step on the accelerator sharply

If the accelerator is slammed, the speed of the diesel engine will increase sharply, which will cause some friction surfaces on the engine to wear violently due to dry friction. Besides, the acceptance force of piston, connecting rod and crankshaft changes greatly, which will cause severe impact and easily damages the parts.

After the diesel generator flameout, the circulation of cooling water stops, the cooling capacity decreases sharply, and the heated parts lose cooling, which easily causes overheating of cylinder head, cylinder sleeve, cylinder block and other parts, resulting in cracks or the excessive expansion of the piston is stuck in the cylinder liner.

Therefore, the diesel genset should be unloaded before flameout, and gradually reduce the speed, no-load operation for a few minutes.

The poor cooling water of the generator set will reduce its cooling effect, and the diesel engine will overheat due to the lack of effective cooling;

The high temperature of the cooling water and oil will also cause the diesel engine to overheat. At this time, the heating load of cylinder head, piston assembly and valve is large, and its mechanical properties such as strength and toughness are sharply reduced, which increases part deformation, reduces the fit clearance between parts and accelerate the wear of parts. In serious cases, there will be cracks and stuck parts. 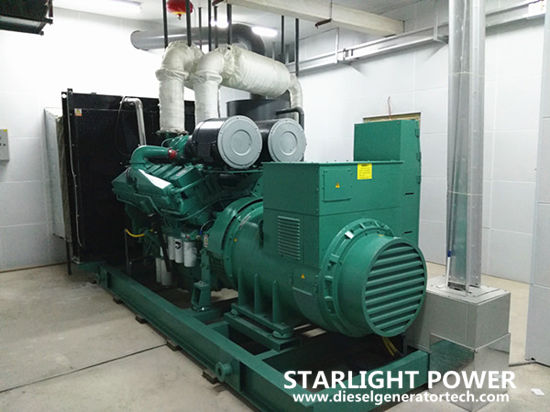 Load operation without warming up the engine after cold start

When diesel generator set cold start, due to high viscosity and poor fluidity of engine oil, resulting in insufficient engine oil supply. Due to the lack of oil and poor lubrication, the friction surface of the machine is severely worn, and even some troubles such as cylinder pulling and tile burning occur.

After cold start, the engine shall be running at idle speed for 3-5 minutes, and the engine can be operated with load when the oil temperature reaches 40 ℃ or above.

Operate with overspeed and overload

When diesel generator set operates under the condition of overload and overspeed, it is easy to increase the thermal load and mechanical load of the cylinder liner, piston, connecting rod, etc., and easy to cause cylinder pulling, tile burning and other faults.

When the diesel genset is running at low temperature cooling water for a long time, the gap between the piston and the cylinder liner is large, the phenomenon of cylinder knocking has occurred, and vibration has occurred, which makes the cylinder liner cavitate. The oil temperature is too low, the viscosity of the oil is large and the fluidity is poor, and the amount of oil in the lubricating part is insufficient, which makes the lubrication worse, increases the wear of the friction pair, and shortens the service life of the diesel engine.

Idle operation for a long time

When the genset is idling, the pressure of lubricating oil is low, and the cooling effect of oil injection at the top of piston is poor, it will result in sharp increase of wear and easy cylinder pulling.

It can also cause poor atomization, incomplete combustion, serious carbon deposition, and sometimes even the valve and piston ring are stuck. For this reason, some diesel generator set operation manual clearly stipulate that the idle running time shall not exceed 15-20min.