Fiber optic cable can be divided into several types. Usually we see single-mode and multimode fiber types available on the market. Multimode fibers are described by their core and cladding diameters. The diameter of the multi-mode fiber is either 50/125 µm or 62.5/125 µm. At present, there are four commonly used OM (multimode) fibers: OM1, OM2, OM3 and OM4. Each type of them has different characteristics. 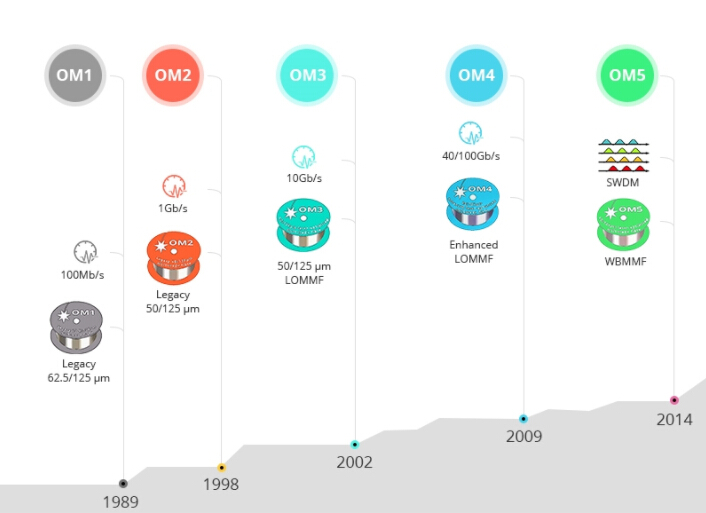 The picture above shows the development of OM multimode fibers. The Lime Green OM5 fibers are newly released and sure to be the mainstream transmission media in the near future. For more information about OM5 fibers, please turn to: OM5 Fiber Cable – Is It Worthwhile for 40G/100G SWDM4 Cabling Solution

Each “OM” has a minimum Modal Bandwidth (MBW) requirement. OM1, OM2, and OM3 are determined by the ISO 11801 standard, which is based on the modal bandwidth of the multi-mode fiber. In August of 2009, TIA/EIA approved and released 492AAAD, which defines the performance criteria for OM4. While they developed the original “OM” designations, IEC has not yet released an approved equivalent standard that will eventually be documented as fiber type A1a.3 in IEC 60793-2-10.

According to the above table,

There are several differences between four kinds of multi-mode fiber, and we can see them clearly from the table below:

Both OM1 and OM2 work with LED based equipment that can send hundreds of modes of light down the cable, while OM3 and OM4 fiber are optimized for laser (eg. VCSEL) based equipment that uses fewer modes of light. LEDs can not be turned on/off fast enough to support higher bandwidth applications, while VCSELs are capable of modulation over 10 Gbit/s and are used in many high speed networks. For this reason, OM3 and OM4 are the multimode fibers included in the 40G and 100G Ethernet standard. Now OM1 and OM2 are usually used for 1G which are not suitable for today’s higher-speed networks. OM3 and OM4 are used for 10G mostly at present. But in the future, since OM3 and OM4 can support the 40G and 100G, which may make them the tendency.