by Rudy P. SysAdmin at howtofindthemoney
Sunset and calm weather mean wind and solar can and will never replace conventional power generators. By ‘conventional’ we mean coal, gas, nuclear and, where geography and geology permit, stored hydro and geothermal power.
Show a picture like the one above – the entire output of every wind turbine connected to Australia’s Eastern Grid (with a total capacity of 6,960MW) during January 2020 care of Aneroid Energy – to a five-year-old and they’ll soon get it: the idea that a modern, civil society can operate without reliable and affordable electricity supply is ridiculous; that it can do so around the Sun’s daily passage from horizon to horizon and the vagaries of the weather, is childish nonsense.
In reality, power consumers are paying twice. Once, for a conventional generation system that works; and once again for wind and solar generation that can hardly be called a system, at all. 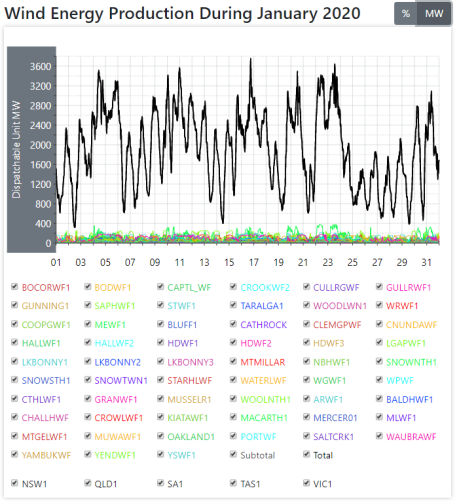