The Process of Coal Liquefaction

by Rudy P. SysAdmin at howtofindthemoney
DEFINITION
The process of coal liquefaction creates synthetic liquid fuels from solid coal as substitutes for various petroleum products.  There are two types of liquefaction - direct and indirect[1].  Direct liquefaction converts solid coal directly into liquid form with no intermediate step, which results in only the partial dismantling of the coal structure.  Indirect liquefaction requires an intermediate gasification of the solid coal to form a synthesis gas, which is then converted to the liquid product.  This process results in the complete dismantling of the coal structure.
In direct liquefaction, coal is exposed directly to hydrogen at high temperatures (450C) and high pressures (14000-20000kPa) for approximately one hour in the presence of a solvent that breaks down the hydrocarbon structure.  Catalysts are used to improve rates of conversion of coal from solid to liquid form.   The resulting liquid coals have molecular structures that require further upgrading to produce usable fuels like gasoline and fuel oil[2]. 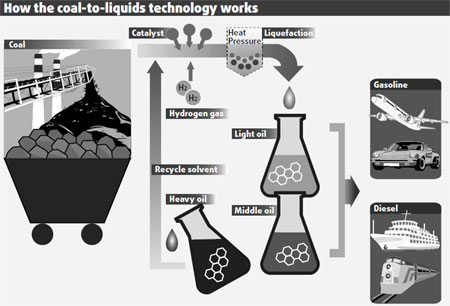 This process was developed as a commercial process in Germany, and produced about 90% of aviation fuel for the German war effort[3].  Though there are very few programs that continued beyond the late 1980s, the technology has been adapted as a more efficient modification of the German original concept.  One of these modifications is a simultaneous coal and oil refining process.
Indirect coal liquefaction takes solid coal through a gas phase before being converted into a raw liquid form.  This process was developed in Germany at approximately the same time as direct coal liquefaction and was patented by Franz Fischer and Hans Tropsch to become known as the Fischer-Tropsch (F-T) process.  The synthesis gas (syngas) is made up of hydrogen and carbon monoxide, which is then reacted over an F-T catalyst to form a liquid hydrocarbon.  The resulting liquid forms a range of hydrocarbon fuels and products including gasoline, diesel, methanol, and other chemicals[4]. This method was also used to produce motor fuel during World War II, and has been used in South Africa since the 1960s to produce motor fuels and petrochemical feedstocks[3].  Though this indirect process yields a larger number of byproducts and has a lower overall thermal efficiency, it results in more clean fuels.
CONTEXT
Many countries that import oil and natural gas, yet are abundant with coal resources, are turning to coal liquefaction as a way to meet their other fossil fuel needs. However, the trade-off has a higher cost of production and quality of the end fuel. Additionally, environmental issues such as carbon emissions and air pollutants are also a concern.
The 10 largest coal producers and exporters in Indonesia:
Click Here! Top Clean Coal Contractors for Power Plant, Gasification, Liquefaction and Emission Control System
Source: Student Energy