Browse Articles  »  Technology  »  The Chemicals Produced From Coal And Coke...

The Chemicals Produced From Coal And Coke Byproducts

by Rudy P. SysAdmin at howtofindthemoney
A very small percentage of the total coal mined (less than 1 percent) is used in the chemical industry and to make specialty products. Coals used in the chemical industry or for specialty products generally have specific, even unique quality characteristics. High-quality coals and coal-derived tars and gases from metallurgical coking of coals in the steel-making industry are important sources of aromatic chemicals. Aromatic chemicals are carbon-based . Aromatic structures are compounds composed of six carbon atoms bonded in hexagonal ring structures. Coal and metallurgical coking byproducts derived from coal are dominated by aromatic and polycyclic aromatic compounds (more than one ring), which makes them useful feedstocks for a wide array of carbon-based chemicals ( Schobert and Song, 2002). Most of the chemicals currently produced from coal and coke byproducts can also be produced from carbon chemically derived from petroleum and natural gas refining, but some carbon compounds and chemicals are more easily derived from coal. 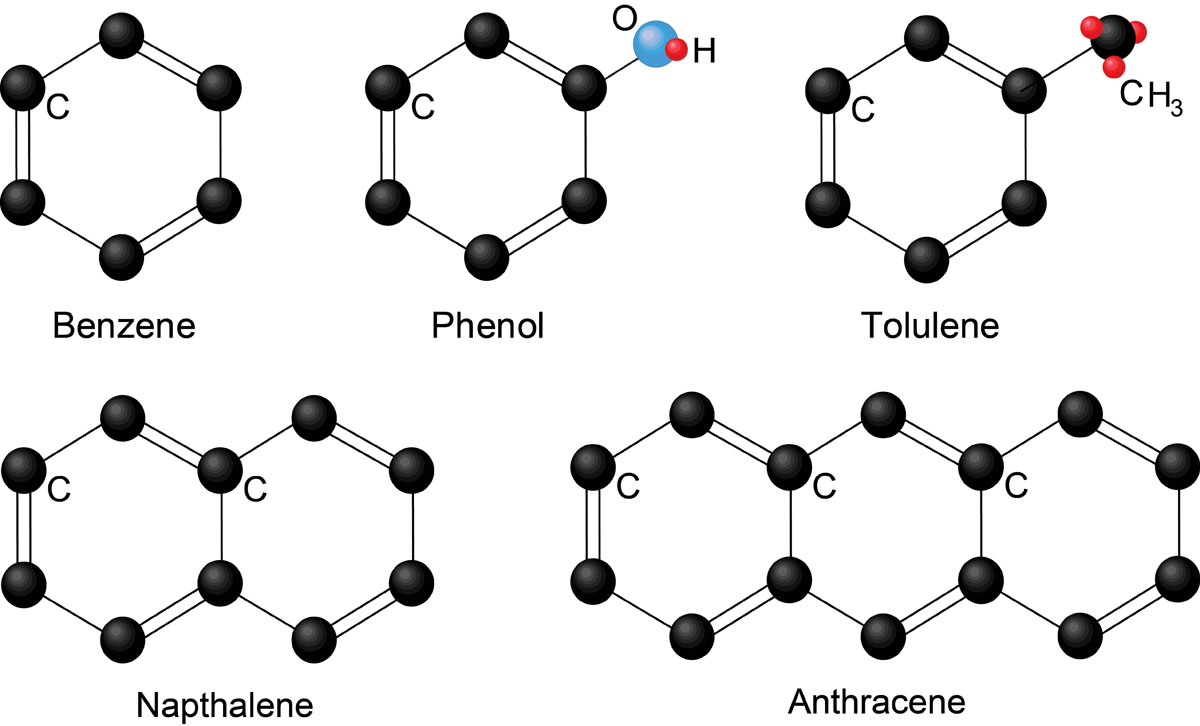 The simplest aromatic structure in hydrocarbons is benzene. Different compounds are formed when different elements are attached to the benzene ring. Two benzene rings bound together are the compound naphthalene. Napthalene is the simplest polycyclic aromatic compound. These and other compounds can be extracted from coal to make a wide array of carbon-based chemicals.
1. Chemicals from Coal
Many chemicals and products we use every day originally came from coal. Although the total market for coal used to make chemicals is very small, many important chemicals are derived from coal gasification and from coke gas in the steel-making process. Many of these carbon-based chemicals can also be derived from other carbon-rich sources, such as petroleum, natural gas, and the refining byproducts of petroleum and gas.
1.a Chemicals from Coal Gasification
Less than one percent of the total coal mined in the United States is used to make chemicals from coal gasification, but the technology provides important products that consumers use every day. Gasification is different than combustion of coal to make heat for electric power. Instead of burning the coal, the feed coal is combined with water in a slurry. The slurry is heated into steam, and oxygen is added in a thermal-chemical process which breaks down the matrix molecules in the coal. The produced "syngas" consists mainly of carbon monoxide (CO), hydrogen (H2), water vapor (H2O), and some other minor gases. These gases can then be separated through chemical processes and used as chemical feedstocks or products. Coal gasification can also be used to provide electricity in Integrated Gasification Combined Cycle (IGCC) plants.
A good example of coal gasification used to produce chemicals from coal is the Eastman Chemical plant in Kingsport, Tennessee. At the Kingsport plant, coal or a mixture of coal and pet-coke is gasified and particulate material is removed from the resulting syngas stream. Next, the syngas is purified through the removal of mercury (Hg), sulfuric acids (H2S), and carbon dioxide (CO2). The sulfuric acids are treated to form raw sulfur (S). Next, the cleaned syngas is separated into carbon monoxide (CO) and hydrogen (H2), which by themselves, are chemical products. Further treatment results in methanol (CH3OH), which is the source material for many important chemicals. One of those chemicals is methyl acetate, which is used in the production of acetic acid and acetic anhydride. The main function of the Kingsport plant is the production of acetic anhydride, which is used to make photographic film, synthetic textiles, and other products (Trapp, 2001; Eastman Chemical, 2003).

Schematic diagram showing how various chemicals are produced from coal gasification (based on diagrams in Trapp, 2001). 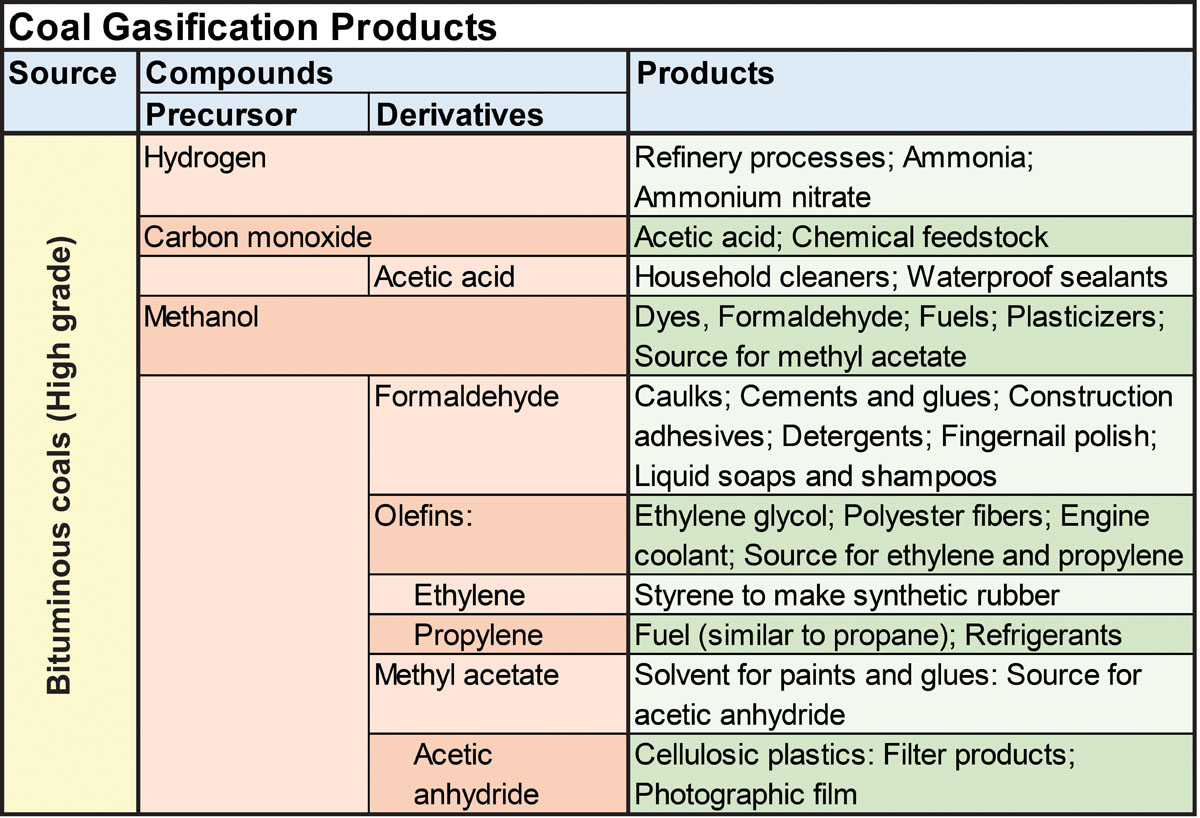 Table of products produced from coal gasification (data from Eastman Chemical Co., 2013; National Energy Technology Laboratory, and U.S. Department of Health and Human Services)
1.b Chemicals from Coking Metallurgical Coal
Most of the chemicals derived from coal come from by-products produced during the coking process. Coal is used to make coke to make steel. Coke gas (also called foul gas) contains coke tars, ammonia, and light oils. Tars are recovered and used to make tar derivatives. Ammonia is recovered as an aqueous solution or as an ammonium sulfate salt. Napthalene, an important poly-cyclic aromatic chemical is also distilled from coke gas and tars. Light oils from the coke gas may be processed to recover benzene, tolulene, xylene, and solvent naptha (e.g., RTI, 2008). A wide array of chemicals and materials are made from these coke by-products.

Generalized schematic diagram showing how coke gas is distilled and converted to tars and liquids which are used to produce different carbon compounds (based on diagrams in Gibson and Gregory, 1971; U.S. EPA, 1995, and RTI, 1998). 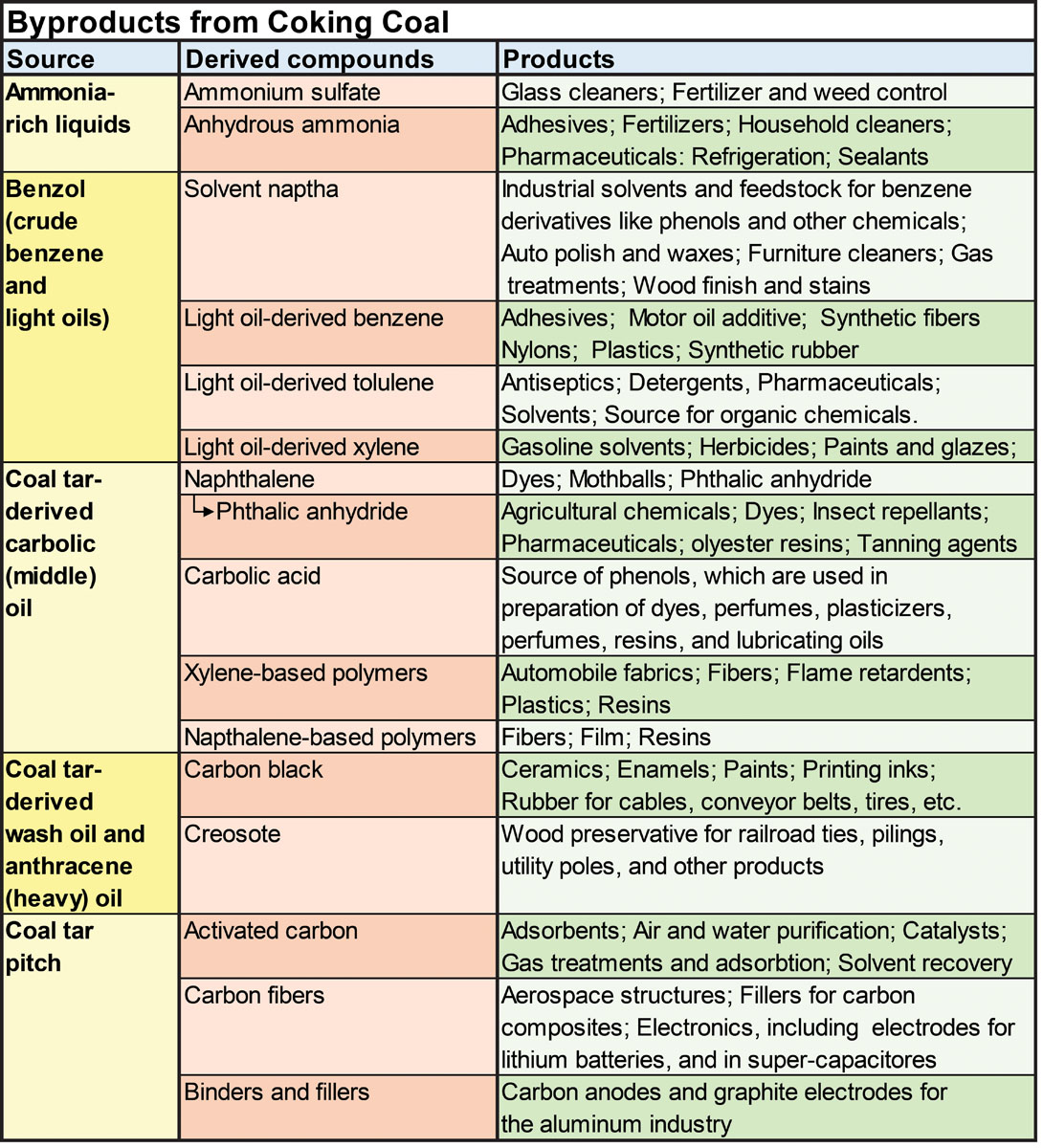 Some of the products and chemicals made from coke by-products (data from Batchelder, 1970; Derbyshire and others, 1994; Grande and others, 2013; Mahler and Van Metre, 2011, Schobert and Song, 2002; RTI, 2008; U.S. Department of Health and Human Services).
Coal-tar pitch is the residue left from coal tar distillation. One of the products derived from coal-tar pitch is activated carbons. Activated carbons are man-made carbons produced to have high internal surface areas so that they have very high micro-porosity. Because of their large pore volumes, they are useful materials in commercial and industrial adsorbents. Activated carbons are mostly produced from charcoal, but can also be produced from coal-tar pitch.
Another product, which can be derived from coal-tar pitch are carbon fibers. These fibers are used in the aerospace industry and in a variety of electronic applications.  There are many different types of carbon fibers and many sources for carbon in carbon fibers, but a minor source is coal-tar pitch.
For more information about activated carbon and carbon fiber research at the University of Kentucky go to the CAER webpage.
Another interesting material that can be made from coking byproducts is carbon nanotubes. Carbon nanotubes are cylindrical carbon molecules, which are only a single carbon-atom thick. Although incredibly thin, they can be made with very large length-to-diameter ratios. Carbon nanotubes have exceptional strength, thermal, and electronic properties, which makes them very valuable in the nano-technological, electronical, and optical industries, as well as being used as strengthening fibers in an increasing number of products. Most nanotubes are generated from graphites and other high-purity carbon sources, but fullerenes produced from coal coking tars can also be used. Fullerenes are clusters of 60 carbon atoms (C60), arranged in essentially a ball shape, like a soccer ball. The Center for Applied Energy at the University of Kentucky has been actively involved in the research of carbon nanotubes from coal and coal byproducts. For more information see the CAER website.
2. Other Specialty Uses of Coal
Aside from electric power, the steel industry, and the chemical industry, small amounts of coal are also used to make activated carbons (also made from coal tars), humic acids for fertilizers and silicon metal for a wide array of silicon products. Coals and coal byproducts have also been tested for a wide array of chemical products such as activated carbons and chemical sieves, but those products are currently made from other materials.
The Blue Gem Coal and Silicon Metal
Silica (SiO2) is one of the most common elements on earth. It is a major constituent of most beach sands and sandstones. Silicon (Si) is an element in silica. Pure silicon, or silicon metal is used in the silicone industry, the aluminum industry, and in the construction of photo-voltaic cells.
Silicon metal is made by chemically and thermally reducing silica sand (SiO2) with carbon (C) materials (coke, coal, wood chips, and/or charcoal) in a submerged electric-arc furnace at very high temperatures (4000°F, 2350°C). The reaction,
SiO2 + 2C  Si + 2CO
produces molten silica (Si) and carbon monoxide (CO) gas. The molten silica is cooled and sold as silicon metal. Other elements can be added to the molten silica to make alloys for the semi-conductor industry.
The Blue Gem coal of southeastern Kentucky is widely considered one of the best coal-carbon sources for silicon metal in the world. It is an unusual coal with very low sulfur (< 1%) and exceptionally low ash (<1.5%) yields. For comparison, the average mined eastern Kentucky coal has sulfur values of 1 to 2% and ash yields of 8 to 10%. The ash content of the Blue Gem coal is so unique, that it is actually less than the ash content of the living plants from which the coal formed! The Blue Gem coal also is used to make silicon metal because of its low ash fusion temperature (Gardner and others, 2007; Hower and others, 2007) and high-silicon reactivity (Myrvagnes and Lindstad, 2007). Silicon reactivity is the relative ability of the carbon in the coal to react with silicon. The Blue Gem coal has very high reactivity compared to most other coals.
The 10 largest coal producers and exporters in Indonesia:
Click Here! Top Clean Coal Contractors for Power Plant, Gasification, Liquefaction and Emission Control System
Source: