by UroCare INDIA UroCare INDIA - Provide Best and Top Urology & And
The prostate is a relatively small (size of a walnut, normally weighing around 7-16 grams in adults) reproductive gland surrounding the urethra (the outlet tube of the urinary bladder), housed in the pelvic cavity between the bladder and the rectum and primarily functions in contributing 20-30% of seminal fluid in males.
The prostate gland enlarges with age and if the process happens in an anomalous fashion, it leads to prostate cancer (size increases upto 40 cubic centimeters and weighs around 30-45 grams).
Anomalous changes that together contribute to the disease process accumulate over years until it is at an advanced stage and symptoms are more promiscuous.
Prostate cancer symptoms are usually delayed and mostly observed when the disease has metastasized to secondary organs.
The following are the major observed symptoms which should concurrently be used for differential diagnosis:
Problems during urination.
Frequency – Polyurea, whereby there is an exponential increase in the use of the restroom, mostly during night time.
Urgency – Multiple occurrence of the need to urinate ASAP. This happens due to a loss of control of the bladder muscles. This is also coupled to the sensation of inadequacy after urination.
Hesitancy– Lack of pressure and difficulty in starting and maintaining the urine stream. Classically, this is identified by the interrupted urine stream and a significantly decreased angle of the stream.
Pain during urination – Qualititative burning sensation and gnawing pain in the lower abdomen while urinating. 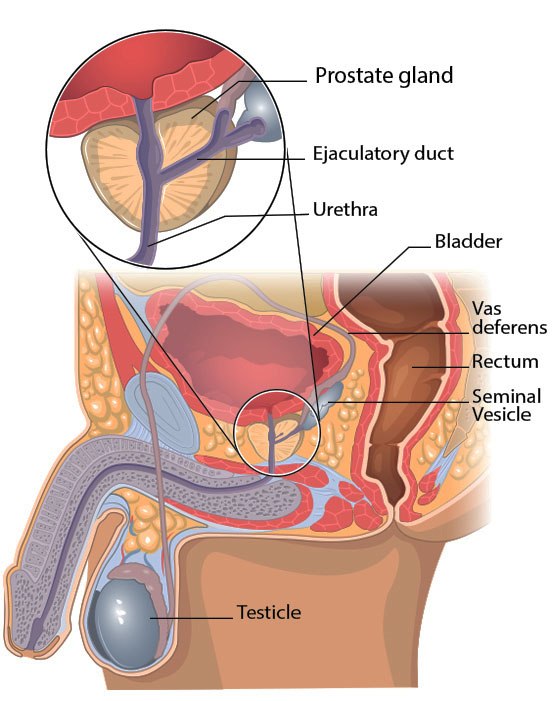 Blood in the urine.
Difficult in penile erection, painful ejaculation or blood in the semen.
Pelvic discomfort.
Persistent pain in back and lower extremity bones and muscles in the back and hip region.
Swelling in the legs as a result of edema.
Swelling of the lymph glands. Prostate cancer normally spreads through the lymphatic system and swollen lymph glands and body ache are outcomes of the process.
Metastatic disease is an advanced stage where the tumor in the prostate gland moves to secondary organs through the blood or lymphatic system. Pain in the abdomen, jaundice and liver failure can be detected for tumors metastasizing to liver, whereas lung metastasis causes severe chest pain and respiratory distress. Advanced disease progression also presents itself with undefined and consistent weight loss and acute fatigue.
The etiology of prostate cancer is not precisely known, but considerable advance has been made at the behest of the National Cancer Institute in the last two decades to delineate the potential causative/risk factors.
Age is considered to be the single most profound risk factor as 70% of the diagnosed patients are over the age of 65. The median age at diagnosis is 67 years.
Read more about the causes of prostate cancer and what are some of the risk factors that make one more vulnerable to this type of cancer.
Early detection through implementation of screening tests:
Currently, there are two well accepted screening modules. Digital rectal exam (DRE) is a non-invasive, per-rectal examination conducted by the urologist where the overall goal is to feel by touch for tumorous outgrowths in the prostate gland. The second strategy involves a blood test for a protein made by the prostate gland, prostate specific antigen (PSA).
Normal PSA levels are less than 4 nanogram/milliliters of blood. PSA level between 4-10 nanogram/milliliters of blood presents a 25 fold increased risk of incidence and a level higher than 10 nanogram/milliliters is indicative of a 50 fold higher risk of prostate carcinogenesis.
The current screening parameters for early detection are ordained by the National Cancer Institute's Early Detection Research Network (EDRN). Even though both ways suffer from false detection when used individually, the sensitivity significantly improves when used together and in a and in prostatitis or benign prostatic hyperplasia (BPH). So any positive test during screening has to be confirmed by surgical biopsies of the prostate tissue and subsequent histopathologic analyses. Specialized Program of Research Excellence (SPORE), another brain child of the National Cancer Institute, is aggressively pursuing research to define other biomarkers and symptoms that can lead to an early detection of prostate cancer.
Additionally, you may be asked to complete a form to evaluate the severity of symptoms and their impact on everyday life. The score of this assessment can be compared to past records to determine if the condition is worsening.

Other prostate problems
An enlarged prostate means the gland has grown bigger and happens to almost all men as they age. As the gland grows, it can press on the urethra and cause urination and bladder problems.
An enlarged prostate is called benign prostatic hypertrophy or hyperplasia (BPH). It is not cancer and does not increase the risk of prostate cancer.
It is believed that factors linked to aging and the testicles themselves may play a role in the growth of the gland. The men who had their testicles removed at an early age (for example, as a result of testicular cancer) do not develop benign prostatic hypertrophy or hyperplasia (BPH).
Similarly, if the testicles are removed after a man develops BPH, the prostate begins to shrink in size.
Some facts about prostate enlargement are:
The probability of developing enlarged prostate increases with age.
BPH is so common that it has said, "All men will have prostate enlargement if they live long enough."
A small degree of prostate enlargement is present in many men over age 40 and over 90% of men older than 80 years.
We have not identified risk factors other than having normally functioning testicles.