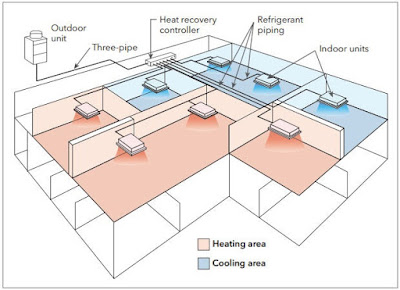 In 2017, the global variable refrigerant flow (VRF) systems market generated a revenue of $11,400.7 million and is predicted to advance at a 13.4% CAGR during the forecast period (2018–2023). The market is growing because of the rising demand for energy-efficient heating, ventilation, and air conditioning (HVAC) systems and inclination toward state-of-the-art technology and modern controls.

These systems allow simultaneous cooling and heating for different zones, because of which they run less frequently and at a lower capacity. In addition, VRF HVAC systems are designed to capture heat while it is cooling and reuse it in different areas that need heating.

The VRF systems market is also witnessing growth due to the rising inclination toward state-of-the-art technology and modern controls. VRF HVAC are able to control temperatures of various zones as instead of one large unit for pumping air out, they have different air handlers which can be controlled individually as per the heating and cooling requirements.

Furthermore, the small-sized air handlers do not need as much wall and ceiling space for as the traditional systems. These features make VRF systems suitable for different settings, including office spaces, luxury apartments, restaurants, and retail stores.

Get Sample With Technical Innovation :  https://www.psmarketresearch.com/market-analysis/variable-refrigerant-flow-systems-market/report-sample

A key trend in the VRF systems market is the expansion of open network compatibility of VRF control systems. Open networks help in the central management of various units by multiple manufacturers in a central air conditioning system.

The preference for VRF systems which are compatible with open networks in large buildings, where there is a need for management of other equipment along with the air conditioning systems, is growing among the users.