By John Austin, CEO of FreeMart 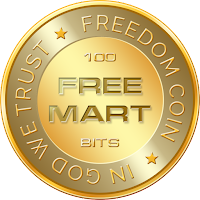 Freedom Coin is not a product, but rather a solution to a failed economic system. The only place to get Freedom Coins is from FREE-MART, a company bringing honor to business. You can't purchase Freedom Coins either. You earn them by purchasing FREE-MART products and services. Then you can use your Freedom Coins to make purchases anywhere Freedom Coins are accepted. The treatise below explains why I believe Freedom Coins will be the most popular currency in the world in the next few years.

Think your money is safe in the bank? Think again. A recent bombshell from the New York Times exposed that the nation’s biggest banks have willingly turned bank accounts over to the government for total confiscation. It’s all done in secrecy, often initiated by the bankers.

Tragically, bank account holders don’t even know they’re being targeted until after the money is seized from their accounts. The banks’ deplorable actions have resulted in millions of dollars stolen from U.S. citizens without a shred of due process. And in 80% of the cases, no criminal charges were ever filed. Even more alarming – in a matter of just a few years – these cases of unconstitutional bank account seizures have risen over 500%!

Since the earliest recordings of history, there have been individuals that have sought to gain an unfair advantage over others.

This can be done in a multitude of ways. Some farmers selling livestock keep animals away from water long enough to make them very thirsty and then they let them have all of the water they can drink just prior to taking them to market. This is where the term “watering down stock” originated.

I recently saw a video on the Internet where they were using large needles on the end of a water hose to inject water into slaughtered chickens. They plump up right in front of your eyes and have a much better appearance. And guess what, the consumer is paying for a lot of water at chicken prices.

All kinds of products can be diluted or watered down with cheaper ingredients, reducing costs and increasing profits for the vendor.

A lot of the cottage cheese that you buy is cheap plaster of paris mixed with cottage cheese. (How delicious!) Expensive, but fake olive oil is made from cheap and disease-causing, toxic rape seed oil to which is added some coloring and flavoring that makes it appear and taste like healthy olive oil.

Any kind of scale or measurement can be manipulated in favor of the controlling person or party. Gas pumps can show more gasoline than is actually being pumped. Voting machines can be programmed to give one candidate the election no matter how the votes are cast.

The United States has given power to a private bank (Federal Reserve Bank) to print USD currency that has no value, which the government then borrows to finance illegal wars and world conquest, which then has to be paid back with interest by the American taxpayer, with money and labor that has been devalued by inflation.

All of this is done by preying upon the ignorance of the citizenry and the customer.

This is why God has commanded we have just standards of weights and measures. In the absence of just standards, there can be no confidence in honestly dealing with one another.

All wealth comes from labor and money represents a value that you receive in exchange for your labor. Even the value of gold, silver and diamonds  is relative to the labor that was required to dig it from the earth.

Whenever governments and banks have the power to create money out of worthless paper and ink, it is a tax on your labor. The value of your labor is diluted by the quantity of this “new”money that is put into circulation.

The Bible forbids the changing of weights and measures (value of your labor) and doing so carries one of the stiffest penalties.

One of the biggest frauds that has been perpetrated upon mankind is fractional reserved banking and the printing of fiat currencies. It is no more or less than counterfeit money that reduces the value of your labor, whether it is printed by criminals inside or outside of government.

Can we create an honest economy?

Several attempts have been made to escape the injustices of the fiat money systems through bartering. The problem with bartering has always been how do you trade a dentist appointment for a shoe shine and make change?

Bitcoin was simply a new innovation in currency

Bitcoin was created in 2009 as an honest and secure method of bartering services between computer techs. It was the first bartering system that was able to keep accurate credit debit ledgers, made possible by the invention of the computer.

The amazing thing is that with no advertising and no plan for spreading it to the world, it is currently the most valuable currency in the world. It is accepted as real money by over 600,000 merchants worldwide…

What Is So Special About Bitcoin?

The Bitcoin is a system which allows you to do anonymous currency transactions without anyone knowing about the payment or other information related to the payment, including who sent it, who received it, etc., unless you choose to tell them!


When making a purchase or transferring money, you don’t need to provide any of your personal details like your name, address, email, phone number, etc. In comparison, when you use payment gateways like PayPal you have to give up all these personal details.


Bitcoin is a deregulated currency outside of the fiat money system. Deregulation is usually a good thing. For example, deregulation took my long distance phone bill from $600 a month down to $25 a month and I actually use more minutes now than I did before.

Deregulation of currency would do away with the need for banks and it would stop governments from fighting illegal wars and prevent 99% of the give-away programs that have made slaves of the working class. It would also stop theft of your labor through inflation.

Bitcoins could have replaced fiat currencies worldwide and solved virtually all of the problems that are inherent with paper money, if it were not for a few problems of its own.

The main problem that has kept the masses from using Bitcoin is due to its volatility. Speculators and money traders love volatility (fluctuation in price), but average individuals do not. They don’t want to hold money that can potentially take a sudden drop in value overnight.

We are also aware of other problems that we will not divulge at this time, because by the time other people discover these things, Freedom Coin could become the dominant crypto-currency worldwide.


In at least one case hackers have broken into computers and stolen large volumes of coins. We learned from their experience, and there is a better way of creating a crypto-currency (encrypted credit debit ledger) that could make the FREE-MART 100 Bits Coin the dominant worldwide alternative currency.

This can potentially eliminate the need for ever using fiat currency again.

Money transfer companies are collecting over 40 Billion dollars annually in user fees, mostly from people who have to leave their home country to earn money to support their families and when they send it home they are charged a hefty fee and sometimes it is up to 1/3 of the amount being sent.

The day is coming when those same people will be able to join FREE-MART and send any amount of money to anyone in any part of the world for less than a dollar in user fees.

Part of the FREE-MART mission is to take a huge portion of those billions of dollars that are being extorted from the poor and give that money back to the people!

The only way to acquire Freedom Coins at the present time is through FREE-MART commissions. Twenty percent of the commissions paid to members will be in the form of Freedom Coins which can be spent dollar for dollar to purchase FREE-MART products.

In much the same way that Bitcoin has attracted over 600,000 merchants that accept Bitcoins in exchange for products and services, Freedom Coin is expected to do the same, only on a much grander scale.

This will create an economy outside of the fiat system where FREE-MART members will be able to spend their Freedom Coins on virtually anything they may choose to purchase.

As the demand for Freedom Coins increases, the value will likely increase in a similar fashion as it did with Bitcoin, which in turn will create even more demand as more people see Freedom Coins as a good place to safeguard their money.