Browse Articles  »  Gaming  »  Everything to Know About Call of Duty: Warzone...

Everything to Know About Call of Duty: Warzone Chat Issue

by Charlie Noah Web Designer
The popular first-person shooter video game franchise, Call of Duty’s latest version Warzone is facing issues in its chat features. Thus, about this concern, several gamers across the world have submitted a complaint on Call of Duty’s support tech. Although, it’s been only a day since gamers are unable to avail of the chat service in Call of Duty: Warzone however during a pandemic, gamers are using the chat services a lot.
In contrast, Infinity Ward stated to Call of Duty: Warzone gamers that the following issue has occurred due to Xbox Services. Thus, the chat feature has interrupted because of a server issue in Microsoft Xbox Live services. Gamers who rely on Xbox Live services to chat while playing Warzone have to wait until the issue gets fixed. 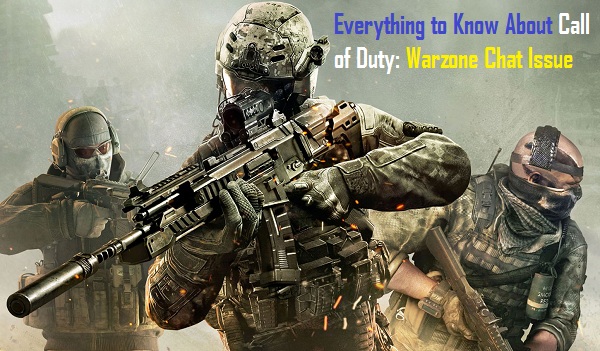 About this context, Microsoft has also issued a statement in which they have mentioned that they have detected the issue and soon in no time, they will succeed in fixing it. They have also added that their service will be started soon and they are extremely apologetic for the delay.
The major question that arose in everyone’s mind is that excessive internet usage is the major cause behind this issue. Like last week, we have seen a major server failure in Pokemon Home, and thus, it has disturbed millions of gamers across the world. Since the pandemic has arrived, internet usage in the whole world has increased, which often led to the crashing of the servers. Call of Duty: Warzone is quite famous these days and thus during the night most of the gamers go online through Xbox Live services. Thus, it is quite clear that it is a matter of server’s crash; however, Microsoft didn’t say anything in this reference.
The Pokemon Home server issue gets fixed in nearly two days, thus gamers who used to play Call of Duty: Warzone through Xbox One need to wait at least for a couple of days. However, they can still play the Warzone without any problem; however, they would be unable to chat with their friends.
Moreover, there are various other alternatives available which they can probably use to go online in Call of Duty: Warzone. Alongside this, they can also use the Warzone Ping System to go online, but it’s really hard to use it. Meanwhile, the gamers should wait until Microsoft fixes this issue properly because engaging their game into other services could be proved wrong. Thus, they should wait, rather than regret later.
Charlie Wilson is a Microsoft Office expert and has been working in the technology industry since 2002. As a technical expert, Charlie has written technical blogs, manuals, white papers, and reviews for many websites such as office com setup.Source: Everything to Know About Call of Duty: Warzone Chat Issue