by Rudy P. SysAdmin at howtofindthemoney
Indonesia ranks 4th in Asia as the largest contributor to CO2 gas emissions. It is estimated that by 2030, GHG total GAS emissions in Indonesia will reach 1563 million tons of CO2 (Syriac, 2016).
Considering the location of Indonesia which is on the equator which has the advantage of the abundant potential of solar energy, five students of Brawijaya University see this as a great opportunity and use it as electricity.
This team combined it with Indonesian natural zeolite (CO2 gas adsorbent) through a new breakthrough called the API-SIWA (Air Pollution Information System Integrated with Air Filtering, Internet of Things, and Renewable Energy). 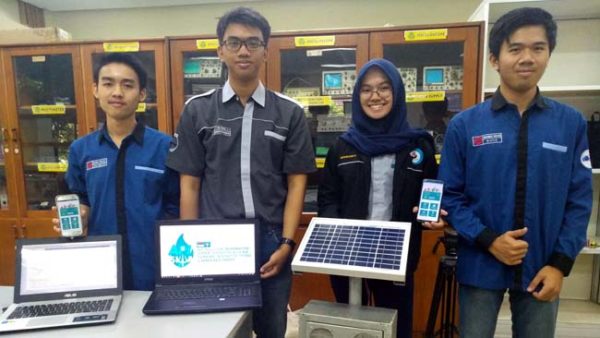 API-SIWA will monitor the condition of CO2 levels in the surrounding environment. If the carbon dioxide level detected exceeds 600 ppm (the normal limit of CO2 levels in the environment), the relay will be turned on to breathe air. Then, that's when the filtering process occurs and the suction fan will capture CO2 gas so that the gas left to exhale is just oxygen.
API-SIWA is able to monitor CO2 conditions in the surrounding environment in real-time, and conduct a filtration process to reduce CO2 levels, as well as provide information about the health impacts caused by CO2 levels available through the Android application.
The API-SIWA Team consists of I Wayan Angga Jayadiyuda (FT 2016), Muhammad Khuzain (FT 2016), Hafidh Hidayat (FT 2016), Naila El Arisie (FT 2016), and Allysa Apsarini Shahfah (FILKOM 2016).
Under the guidance of Ir. Nurussa’adah, MT, this team won the Silver Medal at the Japan Design, Idea, and Invention Expo 2019 on June 15-17 at the Tokyo Bay Ariake Hotel, Japan organized by WIIPA (World Invention Intellectual Property Associations) and Chizal Corporation.
"With these findings, it is expected to solve the problem of air pollution, prevent global climate change, and increase the level of public health," Angga represent the team hoped.
The 10 largest coal producers and exporters in Indonesia:
Click Here! Top Clean Coal Contractors for Power Plant, Gasification, Liquefaction and Emission Control System
Source: Brawijaya University