by Rudy P. SysAdmin at howtofindthemoney
Introduction
If we were in a global war against climate change, we would carry out large-scale carbon capture, utilization, and storage (CCUS) (Smit et al., 2014). Some argue that if we fight the war against climate change via CCUS, this implies that we are promoting the continued use of fossil fuels instead of replacing fossil fuels by renewable energy such as solar and wind. At present, the contribution of fossil fuels in our energy supply is over 80%, while the renewable is only 10% (International Energy Agency (IEA), 2013). Most, if not all, of the energy scenarios predict an increase in the share of the renewables, but in absolute numbers the fossil fuels will continue to provide most of our energy needs in the foreseeable future. This is simply because the growth in renewable energy will not be able to keep up with our increasing energy demand associated with a growing world population. In such a scenario, a war against climate change without CCUS implies that we have to dramatically reduce our current energy consumption, and hence, accept a dramatic reduction in GDP. Thus, the adaptation of large-scale CCUS might be inevitable to mitigate ever-increasing CO2 emissions with given population growth predictions.
At present, there are still very few signs of starting a war against climate change soon. The consequence is that we may significantly overshoot CO2 levels in the atmosphere before any serious action is taken. In such a scenario, it is very likely that we also need to deploy technologies that can achieve negative emissions (i.e., direct CO2 capture from air). In this scenario, the price of carbon will be so high that any technology that uses CO2 as a source of carbon will have such an economic advantage that CO2 will replace fossil fuels for those applications (e.g., plastics and soaps). Thus, CO2 utilization next to storage will be an integral component of carbon management. 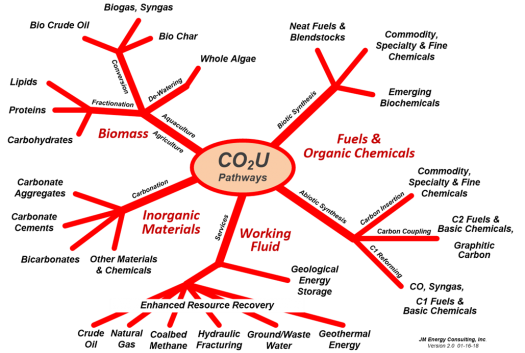