Cancer Treatments: Cure Pharmaceuticals’ New Data on Cannabis Could Be A Breakthrough

In the market today, the global wellness industry is considered to be one of the highest valued industries worldwide, amounting to more than $3.7 trillion in sales each year.  One reason for this is lies in the fact that the industry generally covers a broad scope from public health to personalized medications and supplements. Aside from this, an increasing awareness about the importance of having and maintaining a healthy lifestyle has resulted in rising  demand for health and medical products.

In the industry, cannabis is considered to be one of the fastest growing sectors. Despite its media popularity and potential in medical terms, it is true that the U.S. Food and Drug Administration (FDA) has not yet approved cannabis as a cure for various medical conditions.  The agency’s number one requirement for approval is to have the drug undergo further clinical trials in humans.  As the FDA chooses not to give cannabis its seal of approval, the resulting lack of progress has meant that the total benefits of cannabis are unclear and that some of its risks are still unexplored.  Nevertheless, scientists and researchers alike continue to unlock all mysteries regarding this plant -- and investors are looking for innovative companies within the space in order to gain exposure to its growing assets.

There are still a lot of restrictions and laws that prevent the scientific community from having proper access to explore the potential health benefits of cannabis. Nevertheless, there is really no doubt that the cannabinoids from cannabis (whether natural or synthetic) harbor great potentials as biological compounds.  One company leading the way in the development of cannabinoid cancer treatments is Cure Pharmaceutical Corp. (OTCMKTS:CURR), which is based in Oxnard, CA. and has already started attracting attention as one of the most strategically-sound biotechs in the market.

The company’s stock is still trading near its 52-week lows, and this has led to rising speculation from market analysts which suggests that CURR could be in store for bull rallies heading into next year.  This speculation has only intensified since Cure Pharma established its partnership with the Technion Institute of Technology in Israel.  Their combined research will allow Cure Pharmaceutical to advance its cancer research programs by exploring the effects of several cannabinoid compounds against cancer cells (specifically, leukemia and prostate cancer cells).   Given the size of the consumer market in these areas, the potential influence on the company’s quarterly earnings numbers could be much higher than current expectations.

So far, the Technion Institute of Technology’s laboratory group has uncovered two novel cancer cell pathways that seem to be triggered and activated by cannabinoids. Further studies are still required but the initial results look promising and the likely earnings windfall from new product offerings in these areas are expected to be massive. 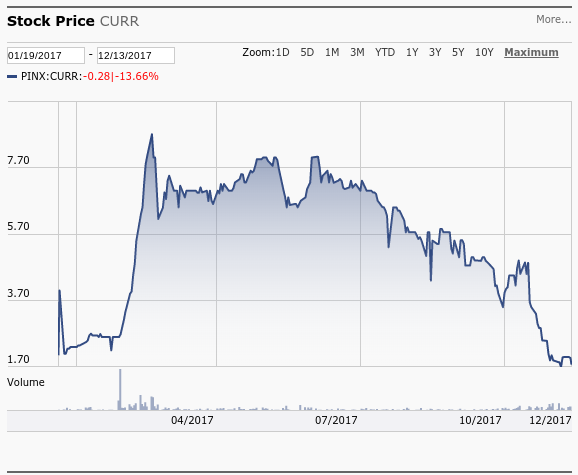 But, as of yet, these positives have not become apparent in the market valuations.  Share prices are currently trading just above the $2 mark, and this equates to a discount of nearly 75% when comparing the stock to its 52-week highs.  Renewed agreements with Therapix Biosciences to formulate a proprietary cannabinoid-based product on CURE's patented multilayer oral thin film CureFilm™ has paved the way toward advancement in the treatment of a wide range of sleep disorders.  These are all factors that will continue to have a positive influence in Cure Pharma’s ability to post strong earnings surprises over the next several quarters.

Indeed, cannabis is becoming more accepted every day -- and those invested in well-positioned stocks stand to benefit once the growth engine begins running at full speed.  Supporters of the legalization of the drug believe that when used correctly, medical cannabis can truly help in treating a number of diseases.  Research from companies like Cure Pharmaceuticals is proving that this is now the case.  Through these types of studies, researchers and medical professionals hope that more medications will be developed in ways that maximize their benefits, especially for the treatment of cancer. Whatever these companies uncover, medical cannabis can no longer be taken for granted and investors will continue to move toward these assets as the potential for growth rises.