by Rudy P. SysAdmin at howtofindthemoney
Canada is preparing a national hydrogen strategy, making it the first country in North America to develop a plan to use the gas to reduce its reliance on fossil fuels and to cut CO2 emissions.
The strategy is expected to be released in the next six to eight weeks, according to an official with Natural Resources Canada, who mentioned the report in a recent webinar hosted by the Canadian Hydrogen and Fuel Cell Association.
Asked to confirm, Natural Resources Canada said has not responded.
Many governments are developing hydrogen strategies as a means of cutting CO2 emissions to meet climate goals. Hydrogen is expected to play a significant role in decarbonizing transportation, one of the leading sectors for CO2 emissions and among the most challenging for reform given its highly distributed nature. Hydrogen can also replace fossil fuels in power generation as well as materials production, such as steel and cement.
Countries that have released a national hydrogen strategy include the Netherlands, Norway, Portugal, Japan, South Korea, Australia and New Zealand. 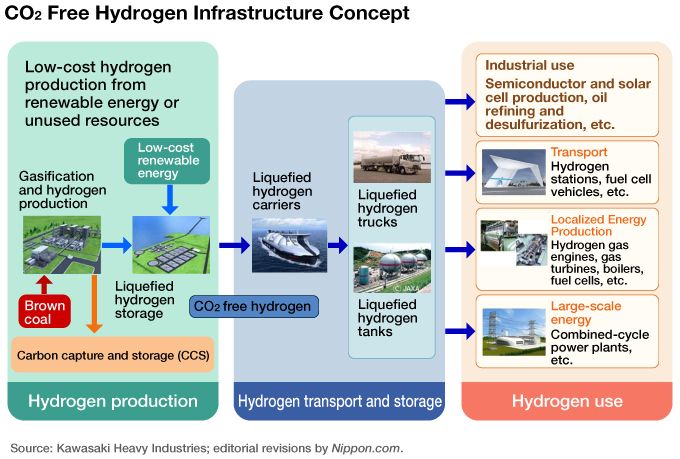 The European Commission is slated to present a hydrogen strategy for the European Union on June 24.
Germany is split on details for various forms of hydrogen support, delaying its national hydrogen strategy since end 2019. Spain is currently developing a hydrogen strategy, while France and the UK have pledged support for various decarbonization efforts that include hydrogen.
US EYES HYDROGEN FROM COAL
The US is without an official national hydrogen strategy, but it is thinking about the fuel, said Steve Winberg, the assistant secretary for fossil energy at Department of Energy. The department sees promise in extracting hydrogen from coal. Currently, roughly 95% of the 10 million mt of hydrogen produced annually in the US comes from reforming natural gas.
"If we are motivated as a country to commercialize hydrogen, we'll develop the technology," Winberg said. "We're well on our way, anyway, but it's a matter of getting the cost down. Once we get to that point, that's when policy steps in."
Driving down costs requires research and development, he said.
"If we don't do that first, then I think putting policy into place to try and advance the technology too quickly just won't work," Winberg said.
Helping to fund private sector hydrogen research is the DOE's Hydrogen and Fuel Cell Technologies Office. Its H2@Scale initiative "brings together stakeholders to advance affordable hydrogen production, transport, storage and use in order to increase revenue opportunities in multiple energy sectors," according to the DOE. The office's budget totals $150 million in fiscal year 2020, up from $120 million in fiscal year 2019.
Hydrogen and Fuel Cell Technologies Office itself came about during the administration of George W. Bush, when he famously touted the promise of hydrogen fuel during his 2003 State of the Union address, according to Daniel Simmons, the assistant secretary for the DOE's Office of Energy Efficiency and Renewable Energy. The Hydrogen and Fuel Cells Technologies Office is within the DOE's EERE office.
"There are not as many incentives in hydrogen at the federal level as there are for other sources," said Simmons. "Interest in hydrogen has been cyclical. It's waned and now it's waxing again ... a reason people are excited today is what do you do with inexpensive wind and solar generation."
Interest in hydrogen is also spurred by its potential to significantly reduce CO2 emissions in the transportation sector, which has been among the toughest to decarbonize, added Simmons.
There is a federal $8,000 tax credit for hydrogen fuel cell vehicles, though it expires December 31.
STATES TAKING THE LEAD
But neither Winberg nor Simmons were aware of any discussions within Washington regarding a national hydrogen strategy for the US.
Morry Markowitz, president of the Fuel Cell and Hydrogen Energy Association in Washington, said states, especially those with zero emissions mandates, and, in particular, California, are taking more a lead when it comes to hydrogen policy.
California has a state tax credit for hydrogen fuel cell vehicles, as well as incentives for building out a hydrogen refueling network.
Markowitz noted that the Defense Department is showing an increased interest in hydrogen fuel, which would allow mechanized troops to run silent vehicles while also providing noiseless power generation in camp in addition to water.
"There is increased recognition of things we've been telling people for years, in that this transformative technology and energy source can help be the answer to many of the challenges our society is facing today and in the future," Markowitz said. "We believe it's not going to be a silver bullet, but silver buckshot, and we are going to be an instrumental part of this new frontier."
The 10 largest coal producers and exporters in Indonesia:
Click Here! Top Clean Coal Contractors for Power Plant, Gasification, Liquefaction and Emission Control System
Source: S&P Global