Browse Articles  »  Business  »  Australia’s Obsession With Wind and Solar is...

by Rudy P. SysAdmin at howtofindthemoney
The so-called wind and solar ‘industries’ were built on lies, myths and propaganda and run on subsidies. As wind power ‘investor’ Warren Buffett put it: “We get a tax credit if we build a lot of wind farms. That’s the only reason to build them. They don’t make sense without the tax credit.” Buffett might have continued, that it’s the only reason anyone invests in them.
As to the lies, myths and propaganda, the spate of bushfires that have swept Queensland, NSW, Victoria and South Australian this summer have energized doomsday climate cultists who – without a shred of scientific evidence – pronounce, with godlike certitude, that those fires were all caused by Australia’s failure to rein in its carbon dioxide gas emissions. Ergo, those fires could have been wholly prevented had we only carpeted every inch of the Australian countryside with windmills and every rooftop with solar panels.
It’s a sad indictment of Australia’s journalistic tradition that the mainstream press not only repeats this nonsense ad nauseam, but magnifies it by berating any politician with the temerity to stick to the facts.
Namely, that a run of above average rainfall years in the early part of the decade increased fuel loads in National Parks and forests, where little or no effort was made to reduce those fuel loads by cool weather burns in the late winter. That unchecked fuel load dried out during the 2019 drought, setting up incendiary conditions. Dry lightning strikes and at least 183 arsonists (the ones that have been caught, so far) did the rest.
Droughts and bushfires have been part and parcel of the Australian landscape from time immemorial. And no amount of virtue signalling from wind and solar obsessed climate zealots is going to change that.
The real risk to Australia is that weak-kneed policymakers will start pandering to them, by cranking up subsidies to wind and solar again and/or placing a punitive tax on the emissions of carbon dioxide gas associated with every aspect of modern human existence.
Ever the self-serving opportunists, renewable energy rent seekers have added to the shrill hectoring, demand more ‘climate action’ (ie more subsidies for wind and solar), not least former PM, Malcolm Turnbull, a man with more than just a little skin in the game: Born Lucky: Stars Align Perfectly for PM’s Son with Mammoth Bet on Wind Power Outfit Infigen
We’ll hand over to Alan Moran for a look at the damage done, so far, by Australia’s obsession with subsidised wind and solar, easily the greatest scam in human history.
Renewables rent-seekers aren’t interested in bushfire prevention – or cheap efficient energy
No amount of mouth-frothing by Piers Morgan or artful deception by the legions of renewable energy warriors published by the Australian Financial Review and the Guardian will change the facts about this summer.
The severe fire season is due to dry weather (not itself conceivably a result of climate change – rainfall trends have been flat for the past century) and the accumulation of combustible material on the forests’ floors. The build-up of combustible material is a result of the criminal neglect of the authorities to undertake or, in the case of private land, to prevent cool burn-offs. Less than one-third of the recommended hectares have been burned-off.
Subsidy seekers in the renewable sector and among its media clients are hinting, sometimes even claiming, that the fires are caused by Australian delinquency in inadequately forcing the replacement of coal by wind and solar. Such policies could never have any effect on the climate. Moreover, Australia has harmed itself far more than any other nation in substituting renewables for low cost, reliable coal. This is demonstrated by these two charts on per capita spending: 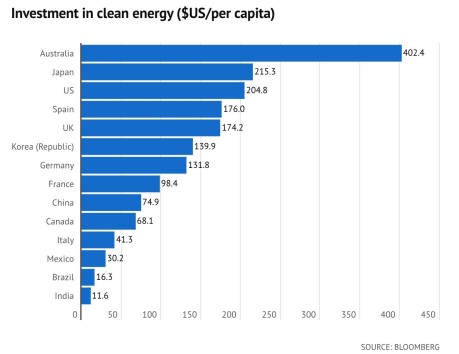 Share of solar rooftop installations in total dwellings
Investment in clean energy largely means wind and large scale solar which are subsidised by 50 per cent plus and, in forcing out low-cost coal generators, have brought the doubling and more in prices that we are experiencing. The rooftop installation, subsidised to the tune of about 30 per cent, have added to this damage.
The cure for the forest fires is simple – resume the clearance of forest floor debris by burning in accord with forest experts’ recommendations – and prosecute for criminal negligence those politicians and officials that have prevented this.
As for energy, the solution has to be based on allowing the markets to determine the structure of generation. We gain nothing by forcing lower greenhouse gas emissions, even if such measures had anything but a trivial effect on the global climate. Our own 1.3 per cent of total global emissions is not only inconsequential but is dwarfed by the 75 per cent or more of emissions from countries like the US and China and other “developing” countries that will undertake no abatement activity. Some stargazers, besotted with an elevated view of Australia’s influence, maintain that in abating our own emissions we will provide a role model for these countries that they will eventually adopt!
Angus Taylor is making some steps in this direction by encouraging reliable supplies based on low-cost fossil fuels and hoping he can hold the line against further subsidies to renewables. But this is not enough.
Without the current array of subsidies and regulatory restraints, Australia would likely have an electricity supply system based 90 per cent on coal with the rest gas and hydro to allow for peaks and fast start capacity. This pattern (or an alternative one if costs have changed) would result from ceasing all subsidies immediately and removing restraints on coal and gas production that have been established by regulatory policies against mining and even, in the case of gas, on exploration.
Subsidies to rooftop supplies cannot be clawed back since they are paid up-front. Subsidies paid to wind over previous years also cannot be retrieved but all new disbursements for existing and future installations can be stopped. After all, the industry has constantly assured us all that within the space of a few years they will be cheaper than coal and subsidies will be unnecessary.
Doubtless, the subsidy seekers would scream “sovereign risk” at such measures. It would claim the government is reneging on its “commitments” that force the electricity customers and taxpayers to fund them. But such voices were never heard when government decided to subsidise the renewable supplies, thereby undermining the financial viability of the existing generators.
Many years ago, former Treasury Secretary John Stone counselled business to be wary of seeking subsidies with the words, “favours readily given can just as readily be taken away”. He was referring to tariff protection, which was eliminated and was instrumental in a burst of national economic growth. It is time for such policies to be applied to roll back the damage that misplaced subsidy provisions have done in converting the world’s cheapest energy supply to among the dearest.
Removal of all subsidies will gradually allow the formerly low cost, reliable electricity and gas industries to mend themselves. It is a policy in the national interest and it should be incumbent on politicians not simply to fawningly follow the rhetoric of the green left economy-destroyers, but to set out to explain the importance of sound policies to all of us.
The 10 largest coal producers and exporters in Indonesia:
Click Here! Top Clean Coal Contractors for Power Plant, Gasification, Liquefaction and Emission Control System
Source: Stop These Things