Browse Articles  »  Business  »  As Subsidies Are Phased Out, European Wind...

As Subsidies Are Phased Out, European Wind Industry Faces 'Day of Reckoning'

by Rudy P. SysAdmin at howtofindthemoney
The wholesale collapse of Europe’s wind industry suggests that so-called ‘sustainable’ energy ain’t so sustainable, after all. Big turbine manufacturers are sacking workers in droves, watching their share prices plummet and pulling out all stops to stave off bankruptcy. Accumulating hundreds of €millions in losses, turbine maker Senvion entered into self-administered bankruptcy/liquidation in April.
Danish turbine maker, Vestas is on the brink and was recently forced to axe 600 of its groovy ‘green’ jobs. Its rival Siemens Gamesa, has also been forced to wield the axe, sacking 600 workers in its Danish operations.
As Dr John Constable details below, the writing’s been on the wall for some time [Note to Ed: is this what they mean by the ‘inevitable’ transition?!?].
Dr Constable clearly enjoys an unusual moment of candour from one of Europe’s top rent seekers, Eddie O’Connor. Eddie & Co have apparently recognised, with terrifying clarity, that their rent seeking days are all but over. 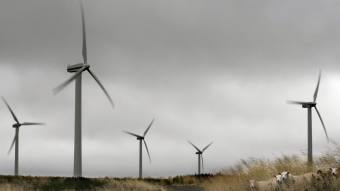 Redundancies, Bankruptcies, Unrealistic Power Contracts: The Wind Industry Crisis Deepens
Redundancies at Enercon, the ongoing saga of the Senvion bankruptcy, and growing unease within the wind industry itself at the extremely low power prices being contracted, suggest that in desperate efforts to maintain a lucrative market position the sector has put itself in danger.
Eddie O’Connor, the founder of Airtricity and Mainstream Renewable Power, is one of the most notable entrepreneurs in the wind industry and is consequently regarded with awe. His personal success speaks for itself, and if he chances to add anything further, obiter dicta, people pay attention. Speaking at a Reuters conference, Offshore and Floating Wind Europe 2019, which was held in London on the 11th and 12th of November this year, Mr O’Connor seems to have dropped a bombshell. Reports claim that he shocked his audience by describing the wind sector as “on its knees” and in a state of “failure”, because “cut-throat” competition has driven contracted power prices to levels so low that wind is no longer “profitable”.
No objective observer will disagree that the wind industry overall appears to be struggling. Enercon, the Mercedes Benz of turbine makers, has just announced 3,000 redundancies in its home town of Magdeburg, and admitted to a $220m loss in 2018, with worse to come in 2019 (“Thousands to lose jobs as German wind crisis hits Enercon” 11.11.2019).
Indeed, in a measure quite incredible for a flagship German firm, Enercon has explained that it can no longer afford to make wind turbine blades in Germany, and will perforce attempt to preserve its viability by manufacturing overseas, presumably in locations where lower energy costs mean that labour is much cheaper.
Senvion, another troubled German manufacturer of wind turbines, entered into self-administered bankruptcy/liquidation in April, but has subsequently struggled to deliver reassuring news to the markets. On the 1st of November, and in the light of the fact that Senvion had not provided financial reports since beginning of the year, Moodys withdrew all its ratings from both Senvion S.A. and its subsidiary Senvion Holding GmbH, adding that it “continues to expect a meaningful loss to the current noteholders”.
It is clear that the problems summarised in an earlier Energy Comment post for this blog, “Is the Long Renewables Honeymoon Over” (11.05.19), are very far from diminishing and indeed seem to be growing still more serious.
Cutting through this miscellany of industry difficulties Mr O’Connor went straight to the heart of the matter, profitability, with his emphasis on contracted power prices. As is notorious, there has been a strong tendency in recent years for the wind sector in general to justify earlier and generous subsidies on the grounds that costs had, as a result now fallen. Offshore wind projects, for example, are claiming dramatic (and implausible) capital cost reductions, backing up such claims by signing contracts to supply electricity at surprisingly low prices, even at so-called Zero-Subsidy levels. In the UK the latest instance of this is the Round 3 Allocation of Contracts for Difference, which announced strike prices of £40/MWh for about 4.5 GW of capacity at five gigantic projects. This appears to be below the likely wholesale price, let alone below the fundamental price needed to deliver a return on investment for the wind farms themselves.
Mr O’Connor clearly has a point, and though he did not add that Hughes, Aris, and Constable were right in their study for GWPF in 2017, Offshore Wind Strike Prices: Behind the Headlines, his remarks are consistent with the view that those authors took, namely that the CfDs issued in that year were at unrealistically low levels and could only be understood either as mistakes, which seems unlikely, or more probably as complicated options and high risk gambling, a view that Professor Hughes has developed in a subsequent paper for GWPF (Who’s the Patsy? Offshore wind’s high-stakes poker game).
Nevertheless, the logic of the wind industry’s public relations agenda forces it to maintain its position and indeed to go beyond it. Bizarre though it may seem, analysts close to the industry such as DNV GL are now suggesting that future contract bids will be negative, in other words that wind power developers will actually be willing to pay for contracts in order to secure the option for development (When Will European Offshore Wind See Negative Bids?).
But such tactics are clearly hazardous. Andrei Utkin of IHS Markit is quoted in the same source as sounding a warning note:
In a way, when we compare the French and U.K. winning bid levels with forward prices, we already see negative bids: forward baseload prices for year-ahead delivery are above those levels. […] More and more renewables coming onto the grid will result in more curtailment and lower wholesale power prices. […] As a result, the price that renewables will be able to capture in the market will decrease as well, going below their levelized cost of energy and potentially triggering the need for government support.”
Quite. But can the industry survive the transition period to renewed subsidy and will that subsidy actually be forthcoming? Mr O’Connor’s instincts, and he must have excellent instincts for such things, are that the industry’s position is perilous. Wind power may well be in desperate need, on its knees in fact, but sympathy is likely to be in short supply.
The 10 largest coal producers and exporters in Indonesia:
Click Here! Top Clean Coal Contractors for Power Plant, Gasification, Liquefaction and Emission Control System
Source: Stop These Things