Browse Articles  »  Computers  »  All Deceased MCU Character Returning to the...

All Deceased MCU Character Returning to the Marvel Phase 4

Some of the dead characters of the Marvel Cinematic Universe are coming back to the universe for the Phase 4 movies and TV series. Now that the Infinity Saga is over after Spiderman: Far From Home’s launch, there are many more projects coming in Phase 4, and today we will talk about just that. We would specifically talk about the dead superheroes who are reportedly returning on the big screen for phase 4 movies and TV shows. 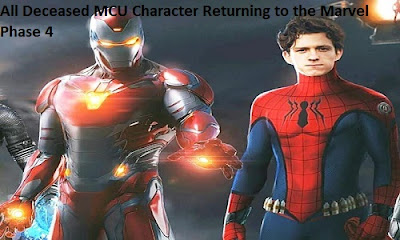 Source: All Deceased MCU Character Returning to the Marvel Phase 4

Phase 4 is full of new characters, and some are old dead heroes also becoming alive on the big screen. 2020 is one of the best years for the MCU nerds to enjoy new heroes and supervillains in the Marvel Cinematic Universe Whether it be Red Guardian from Black Widow or the new alliance of superheroes in The Eternals. There something more than just super-strength in MCU phase 4, as the new movie Shang-Chi and the Legends of the Ten Rings will portray the pure-skilled based superheroes as well as villains.

Here are the dead superheroes who will surely appear again in Marvel phase 4:

Black Widow is one of the recently died characters in MCU, and she is getting a complete solo movie which is set to release this year in summers. She sacrificed her life in order to safeguard her best friend Hawkeye and to get the Soul Stone. In the Endgame movie, she had one of the most regretful death since they weren’t aware of what it takes to get the Soul Stone and when Hawkeye returned to the present timeline, Black Widow was missing among all original Avengers excluding Nebula. Black Widow will feature a complete storyline of the Black Widow superhero, including her origin as well as Budapest’s mission.

After getting his Vibranium forehead crushed from the hands of Thanos, Vision is now getting his own show along with Wanda Maximoff. He was first presented in the 2015’s Avengers: Age of Ultron as he was a result of Bruce Banner and Tony Stark’s experiment. Thanos is extremely strong as he crushed his Vibranium alloy head with his pure physical strength. He didn’t use any infinity stone in order to remove the Mind Stone from Vision’s head. However, Scarlett Witch tried her best to protect her love Vision as well as the Mind Stone.

In the Infinity War movie, we saw Thanos sorrowfully forcing her to fall off the cliff since he had to sacrifice the life of someone he loves in order to get the Soul Stone as stated by the Red Skull. She is one of the core characters in The Guardians of the Galaxy movie franchise. Starlord loved her so much however he failed to protect her from the hands of mighty Thanos in Infinity War. It is reportedly said that she will appear in again in the upcoming Guardians of the Galaxy Vol.3

The man who sacrificed himself for everyone and everything. With Thanos beating the crap out of the Avengers in the Endgame movie, it seems almost impossible for anyone to contend with Thanos even when they get teamed up with thousands of skilled and extraordinary soldiers. With Captain America and Captain Marvel attacks on Thanos, they failed to hurt him after all seriously. Even they completely failed to prevent him from reaching the Infinity Gauntlet in the Endgame. Still, Iron-man proved that he doesn’t need any superpowers in order to kill Thanos as well as his entire army with a single snap.

Nelson King is a creative person who has been writing blogs and articles about cyber security. He writes about the latest updates regarding mcafee.com/activate and how it can improve the work experience of users. His articles have been published in many popular e-magazines, blogs and websites.