At least once in your lifetime, you must have been a part of an Android vs iPhone debate. Both are always into a fight regarding who is the best. While iPhones have many amazing features, Androids are never behind them. However, it has to be accepted that there are a few fantastic features that only Android users can enjoy. Though it won’t put an end to the debate but will surely put some arguments in favor of the Android users.

Here are 7 Android features that will make iPhone users jealous –

1. Use the apps you want, not the apps Google wants you to us

To the biggest disappointment of iPhone users, they cannot change their default app settings. However, Android users can change it all. From switching their default browser as Firefox or Opera to changing their default messaging app as truecaller, they can have it all. Although Apple added the feature to delete its apps from iOS, it doesn’t give you the option to set a default app. Whereas, on Android, you can set your own default apps just by opening ‘Settings’, clicking at ‘Apps & notifications’ and then choosing ‘Default apps’. You can control everything in just a few taps.

2. Google Assistant for the win

While Apple provides its users with Siri, Android users aren’t left alone. They have Google Assistant which is a much more comprehensive app than Siri. Also, Google Assistant has access to Google’s large database and can easily understand all sorts of requests. Google Assistant can help you by linking with other apps on your phone to help you with your reminders or contacts. You can also control other appliances of your home if you have your smart home devices connected to your phone. Although the iOS users can download Google Assistant, they can never use it as their default personal assistant.

3. Use two apps at once through split-screen mode

Split-screen is a feature which is quite helpful and allows you to multitask. You can just watch a video on YouTube and chat with your friends on WhatsApp, or you can reference information from a document while composing an email. Though iPadOS13 has this feature, we have no idea why apples haven’t included this yet in its iPhones. To access split-screen on Android, all you have to do is find the split-screen option from the multitasking menu, but this may vary from phone to phone. You can also adjust the size of the split-screen by dragging the joining line between two apps. 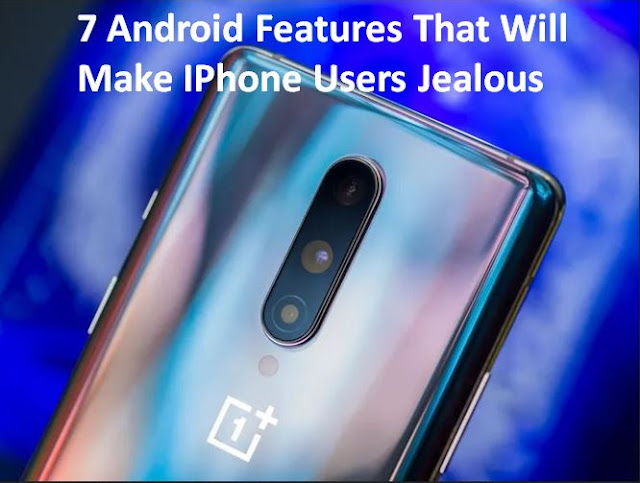 4. Customize your home screen just how you like it

Every Android has a home screen and an app drawer where you can arrange apps according to your preferences. You can also arrange apps on your home screen the way you want to. While Android gives you full freedom, Apple has apps arranged in a  rigid grid on its home screen. You cannot rearrange them in any way but like on Androids you can make app folders. On Android phones, you can also set widgets while Apple has no such option as this.

5. You can use launchers to fully customize your phone

One way to customize your entire phone is to use Launchers. Launchers can change the look and feel of your entire phone making it more personal than it already is. There are multiple launchers available, such as Microsoft’s Launcher, Apex Launchers, etc. Once you dive into the pool of launchers and start exploring them, there’s no coming back. It’s hard to imagine Apple having such a feature for the iPhone anytime soon.

6. Never get bored thanks to automatically changing wallpapers

If you want to make your phone look new every day but don’t want to waste time and energy on exploring launchers, Google Wallpaper’s App is for you. This app will change your home screen and lock screen wallpaper every day to give you a fresh feel. All you need to do is select a few styles from a category of beautiful wallpapers and rest will be done by the app automatically. You can actually do so much with so little.

7. Watch a video and text at the same time

Have you ever seen how easily you can use Google Maps to navigate and at the same time use your Instagram without having to close any of the apps? Google Maps transforms itself into a small window at the corner of your screen to help you fun two apps at the same time. This is called the picture-in-picture feature which came into the scene with Android Oreo in 2017. Since then, you can watch a video on YouTube and leave the app to text someone while the video keeps playing on the small thumbnail at the corner of the screen. You just have to click on that thumbnail to go back to full screen your YouTube video. Have you ever seen any such feature on the iPhone? We haven’t, because it doesn’t exist.

LAURA BARTON is a creative person who has been writing blogs and articles about security. He writes about the latest updates regarding office.com/setup and how it can improve the work experience of users. His articles have been published in many popular e-magazines, blogs and websites.